Would you buy a pizza from this man?
I think not.


And was it Ralph Waldo Emerson who said 'There is truth, then there is journalism'?
Probably not, although it was the sort of thing he would say.
But, whoever said it, obviously had pizzas in mind.
Don't know what I'm talking about?...Read this
http://sette-bello.blogspot.com/
Yes, you've guessed it. it's the weekend of the world famous annual Sant'Ippolito pizza competition.
Now, if ever there were a travesty of the truth, it's this little tale above; a demonic manipulation of the true story, the actual chain of events on that sunny afternoon in Bernie's backyard.

I know what you're gonna say 'Sour grapes'....But I never use 'em, only stone ground olives (are there such things?), and a speck of spek, but I can understand the confusion.
But as my old dad used to say 'A pizza speaks a thousand words'

So, it's enough to look, indeed gaze (ten minutes minimum) in wonder at my masterpiece. 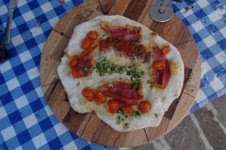 Here you see true art; not only culinary art, but contemporary visual art.
OK I'm too late to enter the Tate competition this year I know, but, come on, you've gotta wonder at its splendour.
Oh, not that I could've entered it anyway, I ate it! So very very delicious it was.
Edible art!
Yes!

...and the Pilates?
After six months of stretching, bending, twisting and contorting my poor body, it's screaming 'enough, no more!'
And me, being the only man in a class of twenty women, I suffered the most. Because the teacher, Roberto, couldn't touch twist and bend the bodies of the ladies as he could mine (being male and all). So I'm more flexible but ache in the places that I used to play and have given myself a summer break. Gardening's gonna be my main exercise until Autumn and swimming and walking and Qi Kong and table tennis (for which, sadly, you don't need twenty women), oh and proper tennis if I can find an opponent, which is doubtful because I'm crap at it.
Massimo might give me a game though, if his toenail is better.
Posted by Michael Eldridge at 5:36 AM

amico,
You got top marks for artistic design... and you out-scored me by a good 12 points. Isn't that enough?

Beautiful pizza- kinda resembles some of your great artwork. I think your pizza contest is an awesome idea. Perhaps it could grow into something so international it could put the place on the map, much like the Chili Cook off that Terlinqua texas has yearly. Maybe in July I can get a pizza lesson from you. Do you make the dough from scratch or do you cheat. I'm sure you are a purist. The Peronis sound like a great idea.
Mark