We are experiencing bleak cold damp weather and Lili suggested we drive to Piedripa to take a Sauna and Turkish bath. Nice clean place but no relaxing area which I found odd, just a too short cold plastic chair next too the Turkish inferno. This was the first Turkish Bath I'd had since Istanbul so I was still somewhat  traumatised by that event which I might tell you about some day if you are an adult and broadminded
Now, the mens' changing rooms have huge sign painted on the door which reads 'MENS CHANGING ROOM' in Italian
Simple enough; so in I whisk to find it inhabited by three ladies with a bunch of little boys whom they are preparing for a swimming lesson.
So I check the sign on door. Yep, it's the MENS CHANGING ROOM..no doubt.
I wait a while. Should I say something? Is it a family day where these things are allowed? Should I go instead to to the LADIES CHANGING ROOM?
Eventually I just go for it and get discreetly changed and in the too hot Turkish Bath I mention this to Lili and she just smiles.
Then when I go back to get dressed; same bunch again. So I get changed once more in a discreet corner, mumbling, grumbling softly to myself.
Driving back she tells me that it would be because the little boys wouldn't want to be seen naked in front of girls. So that's why.
Oh! I see, I say, not seeing at all
Turkish Bath and trauma; definitely a link there

Posted by Michael Eldridge at 3:00 AM No comments:

Starstone Creativity: Coaching and the creative mind:                        the Sibillini mountains, our summer playground in Le Marche I'm a guest speaker at the ICF Global Conferenc...
Posted by Michael Eldridge at 8:52 AM No comments:

From Amandola to Morrovalle. Been here now some 8 months and are settling in gradually. Miss the majesty of the mountains but not their overpowering nature, nor the cold winter (ten years was enough)
We have lost three pets along the way, Bessie died in June, she was 16 years old and happy up uintil the end, never once having had to go to a vet. Then little Tikka who just disappeared. We think she found the change and the uprooting too difficult to handle and that she found an easier home nearby. Maybe she'll make it back someday. Hope so, because I miss her and the little games we used to pay tohgther, whizzing her around the legs of our kitchen table. New arrival Orfeo went missing 10 days ago too. He is a sweetheart and we are praying he'll come back too.
Morrovalle is a pretty little town and the people are friendly. Civitanova is only 15 mins away and cinemas and theatres are all close by, shops too an the sea just 15 mins away too.
We have purchased lots of shrubs and trees and are just awaiting some warmer weather to get stuck in to our new garden.
Will post up some photos along the way. Here's one from my 'Homage to La Sibilla' series 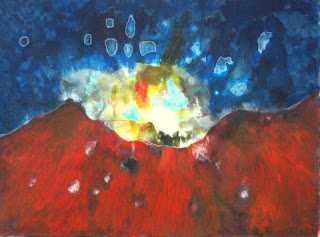 Our Garden Studio at Sambuco

Our garden studio is a delight, so peaceful and tranquil with views across the Sibillini mountains which take your breath away. It's the place to come too to read all those books you've never had time for; to walk unhurriedly though woods and pastures and trek along mountain paths and gorges too. And swim in the sweet water of Lake Fiastra; so blue and clean, or take a canoe and picnic on one of the many little coves around the lake edge.
We are just 12K from both Sarnano (which we overlook) and from Amandola. Both are very pretty medieval towns which come alive in the summer months with festas and fieras, music and theatre as well as antique fairs and food festivals (Amandola is famous for its truffles)
The garden studio has two bedrooms and can sleep five people. Our neighbour, Bernie, can sleep the same number, so we can cater between us for two families or a group of ten. The kitchen is quaint and modern and there is of course a lounge and bathroom. We have wi-fi and a good collection of books left by past guests.


Rental from E450 pw self catering.
Happy to provide meals should you wish


Posted by Michael Eldridge at 9:29 AM 3 comments: 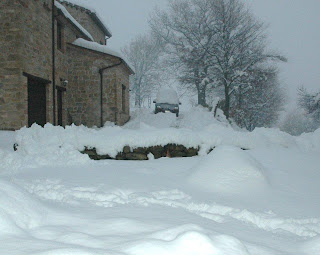 The snowfall lasted 12 hours, silent and windless which meant it did a lot of damage to trees, blocked roads and caused a lot of accidents. I usually do my mole act at such times and bury myself beneath DVDs and crisps. But this one took a pylon down up above Garula and we (or should I say I) were without power for 5 days.
Five days in which I got colder and colder (no heating except a small stove).No TV, no music, no shower or hot water, no electric blanket, so cold bed, Yuk!
Couldn't escape because we have five animals and I just get them all into the Kangoo at the same time. You know, like trying to fit a dozen eels into a jamjar (great pun Mice!) I was finally rescued after five days by hero electicity engineers who had descended from somewhere in Paradise to save me. Took a look at myself in mirror on day six when power and wife came back and I generally agreed with my reflection that I looked very much like a dead worried sheep. especially after an improvised bath which I did a Boy Scout task on. Seven huge pans of boling water poured into bath and washed myself like Clint Eastwood did in those movies. Couldn't get soap out of my hair though, darling, and hence dead sheep impression.
Now, two days after, wife back, sunshine back and deadsheep look slowly diminishing
Tell you what though, it doesn't half make you appreciate the taken for granted things like electricity, heat, water, music, porridge. 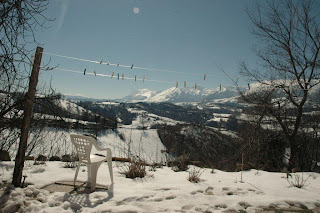 Posted by Michael Eldridge at 6:17 AM No comments:

Hope it doesn’t last though, gotta get over those mountains and snow chains are dangerous.

This is a new painting inspired by a visit to the Tate a few weeks back. Turner struggled with his paintings and so I thought I’d do the same. This one was a fight 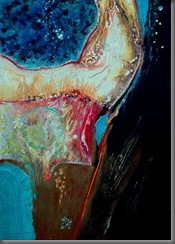 Not much different form what’s going on outside. Minus 3 and the stuff is settling ominously.

Posted by Michael Eldridge at 6:57 AM No comments: 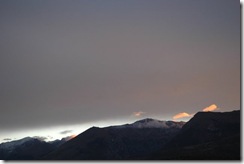 Bessie comes up and nuzzles me for her walk just before sunset.

She gets cross when I start to take photos..and barks her head off.

She always gets her way but I manage to sneak a few shots in.

Posted by Michael Eldridge at 11:08 AM 2 comments: