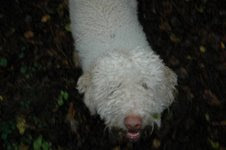 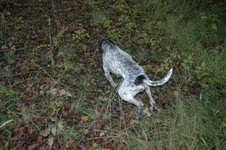 'And his friend with the other dog.'


Not really getting anywhere are we?

What I was trying to steer you towards was some sort of exclamation of recognition.

Yes, like 'Hey, that's a hunting dog'. Or, 'That's a bird dog, duck dog, hare dog, any anything dog, apart from being just a dog!'

So what sort of dogs do you think these might be?

Oh. good grief! How on earth could they be duck dogs in the middle of a truffle wood in Le Marche?
There, now I've said it.

Why yes, you've got it, well done.

Bernie has been invited to write an article about truffle hunting for a very famous magazine which could even possibly be the New York Times (gosh, if only this were true). Although one can never be sure about such things with American journalists (which is what he is) because they all say they are writing for the New York Times and I never know why except maybe it's magic mantra which claims truth by it's very utterance. (Shakespeare, hmm)
So in town we meet Alberto Mandozzi, the President of the local Truffle Society along with his assistant
Marcello. We've already been briefed at some considerable length by Antonio's son about the holy nature of our task and I'm getting to feel that we are going on a secret mission into some ultra-sensitive war zone. We're certainly dressed for the part, wearing what can only be described as combat gear. Truffles after all, can be dangerous critturs warns Bernie.. shouldering his shotgun. The truffle President eyes him suspiciously, dark imaginings flitting across his knitted brow, visions of skies full of helicopters and marines parachuting into his scared groves. 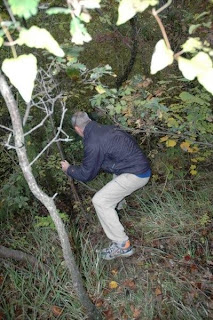 The war zone happens to be in the woods below our house. What? Beneath our house? So that explains the cars we see scattered around our drive all these past Autumns...truffle hunters. Already this eiry feeling that we are entering some magic secret, some other divine dimension.
The dogs, Lampo and Dora spill out of their respective Fiat Pandas and go racing down the hill, our hill, noses already vacuuming the ground beneath them as they zoom down towards the woods.
And so it began, our initiation into the sublime art of truffle hunting. 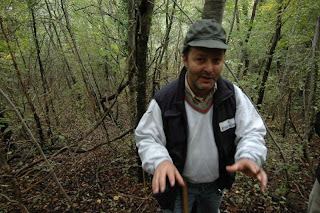 (Alberto has written a wondrous book on the subject...'i Tartuffi del Piceno' but here's a brief synopsis).
There are, he explains, two types of truffle, white and black.
There are four types of black but only one of white. The white you only find in Italy, it can only exist in the wild where it lives a symbiotic existence with the oak tree, attaching itself to the roots of same. The black, which can be grown domestically also depends initially on this symbiotic existence with the oak and a couple of other trees but it then spreads across the woodland floor. The white is four times more valuable than the black (this year fetching E10,000 a kilo) has a richer aroma but a more subtle taste.
And then, most important of all (and this had both Antonio and Marcello roaring with laughter),
there are no white truffles in France, only black. The poor French...... but nothing less, of course, than they deserve. 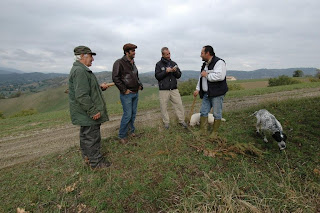 Bernie, Eric the Black, Marcello and Alberto, Lampo and Dora

And this was the most amazing part for me.
That the truffles want to be found and eaten.
This is why they give off such a heady seductive aroma which attracts dogs, deer, cinghiale and snails (yes, snails!) If they could talk they be saying, shouting, 'Find me, here I am, dig me up and eat me', although in Italian and not of course in French.
Because this is how they are spread: the spores pass through the alimentary canal of animals and are deposited across wide areas (in the case of the cinghiale) and considerably shorter distances (probably two metres) in the case of the snail. But it's the snails' excrement that contains the best nutriments for the germination of the truffle spore. Now what do you make of that?
And our hunt? Zero! Didn't find a thing. Worst season for years with no rain in the summer they tell us, but I wonder. I wonder if this is all part of the ritual of initiation. That there is a level two, and we've only passed part one. That, metaphorically, Bernie has to change his shotgun for a truffle spear. You know what I mean, don't you. You do.
Truffles next time. They promised.

The language lesson.
Two weekends back I got stuck in London because of a strike at Falconara airport. Anyone who has ever suffered the trials and arrows of outrageous Ryan Air will know that they don't have an office anywhere, a number to call, nor an email address which replies to you desperate pleas for help or even information. Instead they have countless blue clad colleens who are trained to say to each and every demand 'We can only ask you to go on line and refer to information on the Ryan Air web site sir'
I won't go into the dreadful events of that morning only to say that there were other's in a more desperate situation than myself, those with small kids and old parents who were literally left high and dry. I'm sure these people just gave up and went home.
I'll mention one thing though. When we eventually got to the ticket desk to rebook, this one young colleen suggested to us that we fly to Marseilles. 'Marseilles my dear' I said , 'Is in France.' Well I never she said. Then there this nothing going out for days.
What about from Forli. I asked?
pWhere's that' she said.
Well, turn around and look at the Ryan air map behind you and I'll point you to it.
Oooh, she says, l can try that, can't I?
'Oh why not'
We got a flight to Forli next day. I shall spare you the grizzly details.
Oh, but this is the funny bit.
Having missed the flight, I missed out on a meeting with clients that day and when they turned up at the office that afternoon, Lili told them that she was sorry that I couldn't be there because I'd had a stroke in London, but that I should be back the next day.
She said afterwards that she couldn't understand why they sat down so suddenly and kept saying I'm so sorry, I'm so very sorry.
Posted by Michael Eldridge at 6:07 AM